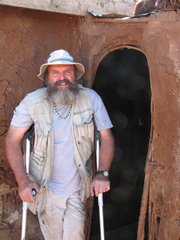 In the spring of 1955 things were shaping up to be a splendid summer. On April 12, news told of a vaccine developed by Jonas Salk that was successful in preventing polio! This created great elation as it looked that there was now something to prevent POLIO, a killing and crippling disease that had for years been attacking the children of America and the world.

Three weeks later to the day, little Davie Talbot  took ill and the next day, Wednesday, his mom took him to see the Dr.  “Just the flu” was the diagnosis. Three days later Davies folks carried his rigid body out to their car and down to Children’s Hospital in Denver, CO.

It was not the “flu”, it was POLIO! Life changed for Davie Talbot.

That was 60 years ago and Davie, now David Talbot, is back on crutches. Having survived the initial disease, David went from wheelchair to braces on both legs with crutches, then just braces and on to just ugly shoes. Several surgeries during his growing years helped to stabilize his polio-affected left leg from injuries and controlled his growth so as to minimize his limp while walking and running.

Talbot recovered well enough that he was very active in sports through middle school, high school and college. During a “gap” year between his sophomore and junior years of college, Talbot spent a year traveling in Europe, North Africa and the Middle East, a lot of the miles on a bicycle.

Once back in the states and back in school, Talbot met and married Candice, his wife of 39 years. They moved to Mankato, MN where Talbot received a Bachelor degree in “Open Studies” and a Dental Hygiene certificate. Opportunities saw the Talbot’s work in many varied environments including Mexico, Appalachian Kentucky (where both were active in the local volunteer fire department), and a kibbutz in Israel. After returning to the US, the Talbots developed their love of photography into a full time photo and video business that took them to four continents on a variety of working assignments.

Then in 2005, while working with a non-profit organization assisting widows and orphans, David saw a woman who’s right leg was twisted up behind her back, her foot touching her shoulder. She was using a freshly-torn branch from a tree as a crutch. “That opened my eyes to see the people on the ground, trying to move about with great difficulty, in their environment” said Talbot. From there, inspiration took over and soon rudimentary plans to collect surplus and no longer needed crutches here in the US, ship them to Africa, and distribute them there to people in desperate need, was born.

“Our initial collection brought in 235 pairs of crutches” says Talbot “and we found space in a container already destined for Uganda”. Since that first shipment in 2006 this endeavor to help those hindered with mobility issues has grown with collections going forward in a dozen states and more than 58,000 pieces of mobility devices being delivered into the hands of mobility challenged people, and all without cost to the recipient, in 15 countries in Africa and 9 other destinations.

When asked about a goal, Talbot said “our initial goal is 1,000,000 mobility devices delivered, but the true goal is to see that every disabled person has what they need to be as mobile as possible in their own community”. Talbot continued “it’s a big goal but with the vast number of pieces of mobility equipment that goes to the landfill every day in this and other western countries, we can get the job done!” And how can such a large task be accomplished? “With the help of organizations like Rotary International and local Rotary clubs, schools and places of worship getting involved in collection and distribution, or simply said, “the power of one” can be employed. One person giving their no longer needed pair of crutches, cane walker or wheelchair, will make a difference in someone’s life in a developing country.

“First though” say’s Talbot, “we MUST see the end of Polio! We are at the critical point where we need all hands on deck to get the job done! Three countries remain, Pakistan, Afghanistan and Nigeria, where extremists hold their own children and grandchildren in harm’s way by not allowing vaccination efforts to continue and to be completed. This is not about governments, religions or ideologies but rather the safety of the children of this planet. We are their guardians and we must rid our world of this horrific and terrible disease. You can believe me because I HAVE HAD IT!”

In the past few years what has come to be known as post polio syndrome has struck.  David is back on crutches full time and recently acquired a leg brace for his weakening left afflicted leg.  It has been tough, but he is determined to see this project succeed and continue long after he is gone.